In the mornings, my son Theo likes to ride his scooter to school. We live on a sloping street and he speeds down the hill to the end of the road and then for the rest of the way, he weaves his way past other families all the way to the schoolyard gate. I run behind him carrying his backpack like a lopsided Sherpa. I willingly take on this role so that he can enjoy his journey to school and avoid further visits to the chiropractor for his back. Then after I drop him off, I wheel the scooter back towards home, sometimes jumping on and propelling myself along the street when I’m feeling particularly perky. Most days, I stash it behind the tree at the end of the street while I go for my morning walk along the lake and then pull it out from its hiding place on my way back home. One morning this week, I forgot to pick it up from behind the tree, and the next morning when I realized my mistake and looked for it behind the tree, it was gone. I was crushed. I felt truly rotten that I’d lost Theo’s fun scooter – I hadn’t meant to give that away to anyone! During one of my breaks from beating myself up, it occurred to me that Adam, our neighbor who lives in the house by the tree, might have put it away to keep it safe, so I sent him an email and hoped for the best. 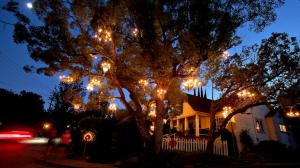 This morning, he replied saying he had done exactly that. When I looked out of the front window, I saw him riding up the street towards our house. I had been saving an iron candelabra to give him, so I grabbed it and took it out to him, asking if he might be able to use it for his tree. In any other neighborhood in Los Angeles, this might sound like an odd idea, but the tree behind which I had stashed the scooter is no ordinary tree. It is probably the most famous tree in Los Angeles – the Chandelier Tree, a hundred year-old sycamore that arches out over the end of our street and glows at night with the light of 40 or 50 chandeliers. Adam has been collecting them for several years now and, with the help of his aerialist roommate Brion, has hoisted them up into the branches, rewiring and weatherproofing them to create a magical tree that draws smiles from neighbors and attracts visitors from all over town. The LA Times recently wrote a feature (http://www.latimes.com/home/la-hm-chandelier-tree-20140712-story.html). After our house fire, we gave him the small chandelier from our damaged home, and today’s candelabra might join it up there some day. I’ve been thinking a lot about giving lately. Adam’s glorious tree, born of his creativity and generous spirit, is a real gift to those around him.