In October 2012, a couple of weeks after our house burned, our beloved cat Tutti died. I’d had him for 13 years, longer than both my husband David and my son Theo, so it was particularly hard for me to lose him after all those years. But he’d had a long life for a cat – 18 years, and I like to think it was a good one. Even though he was rather skittish, he was a sweet, loving and very beautiful kitty and was always close by, especially at night when he would cuddle up next to me in bed. In his last months, unbeknownst to us, he had a tumor on his bladder so was peeing everywhere. We knew something was wrong with him but assumed it was just old age and kidney failure. Mercifully the firefighters rescued him from a nasty death, but in the days after the fire, when we were living in a hotel room and then an almost empty rental house, he was clearly distressed. After one particularly rough night with him, I knew it was time to end his suffering. The next morning was the lowest point for all of us that month. It was one thing to lose our house, but we were somewhat consoled that we’d all made it through the horror. But now we were losing a member of our small family, and it was heart-breaking. 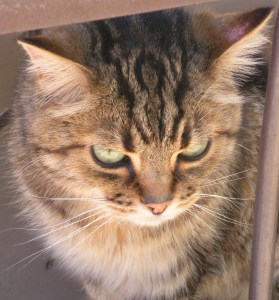 Tutti’s death was as peaceful as it could have possibly been, lying on my chest with me holding him. For days afterwards, we were all really shaken, bursting into tears at different times of the day as we each missed something new about him. One day, Theo expressed his grief by asking me for a brother. If not a brother, then at least a hamster. Or another cat. Please, Mummy. I told him he needed to wait because we had to honor Tutti’s memory and grieve a little longer, but after ten days, I couldn’t stand it anymore and dragged Theo with me to the Pasadena Humane Society to look at kittens. After a couple of visits, we had selected not one, but two adorable little kittens who we brought home with us and named Sonic and Mystic. They immediately injected fun and lightness into our darkened lives, and it has been a joy to watch them grow into lovable, entertaining young adult cats. They both have qualities that remind me of Tutti but, like us, cats are all very unique. Today, I took some old bedding to the Pasadena Humane Society and remembered our visits there over two years ago. I was once again thankful to this outstanding organization for the second chances they give not only to abandoned animals but also to the sometimes heart-broken people who adopt them.