Today, my son Theo and I picked up our good friend Ellen and went kite flying on the beach in Santa Monica. We met up with 104-year old Chinese artist and kite-maker Tyrus Wong and his family and friends. Despite his age, he still manages to make it to the beach fairly regularly to fly some of his spectacular hand-painted and multi-sectioned kites. We have joined the group a few times. Last year we had a battle with a dragon kite we had bought for Theo. It simply refused to fly, probably because his well-meaning mother accidentally snapped off a piece while trying assemble it. The exercise was highly frustrating for Theo, who often suffers from low self esteem, and I’m sure it was added to his list of “things I can’t do.” Not surprisingly he wasn’t enthusiastic about trying again today. However, I was determined to give it another shot and brought along a smaller, simpler kite. Though there was very little wind, a couple of Tyrus’s kites were in the air, inspiring Theo to give his kite a try. He found a spot where his kite wouldn’t get tangled with the others and spent a good twenty minutes coaxing his little blue kite back and forth, letting it drop almost to the ground and then yanking it up into the air again. 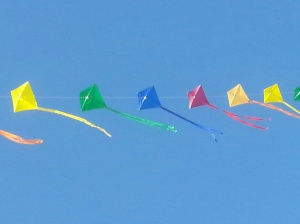 Ellen and I watched his confidence growing with his skill, as he figured out how to negotiate the air currents and dodge the people walking by. She and I have had many conversations about self-esteem and about how hard it is to develop it later in life if you don’t have it as a child. Ellen is an intelligent, highly thoughtful and competent physical therapist, but having grown up with a mother who was less than supportive of her (though her father has always been loving), she still struggles to see her own talent and value. Ever since I first met her nearly 15 years ago on the same beach, I have been amazed at her remarkable energy and physical talents, from volleyball to cycling and now tap dancing! She is also extremely knowledgeable about the human body and has great advice whenever David or I have an injury or ache. She is also one of our most generous friends, helps out when we need a babysitter and is always the first person in the kitchen helping to clean up when we have a party. But most of all, she has a resilient spirit that, despite her imperfect childhood and recent personal challenges, shines through in her kindness, her sense of humor and her deep loyalty as a friend. Today, on the beach, while Theo was building sand castles and self-esteem, I gave Ellen a colorful bracelet made of textile beads that not only matched the belt that she was wearing but also the brightness of her spirit.