One of the interesting things about doing this Giveaway is that when I tell people about it, many of them confess to me that they also want to get rid of a lot of stuff. I have joked a few times that perhaps later in the year, if I’ve run out of things to give away, they can give me some of their things to give away. Last week, a friend pointed out to me that by giving other people my stuff, I may be decreasing my clutter, but I am increasing the amount of belongings they have, which may not be so great for them. A good point. So, when our neighbor Frank, who is one of the people who told me they too want to de-clutter, handed me a box saying that it was something he wanted to give away, I felt it was only fair to take it. It was a Bingo game set, complete with a metal cage. He said it might be fun for our son Theo but that if I didn’t want to keep it, I could give it to the school. [Note the permission to give it away. :)] 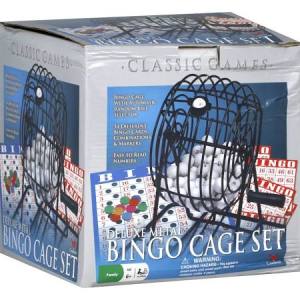 I’ve always enjoyed Bingo, so at first I thought that it might be fun to keep for Theo to play with when he has friends over. So I put the box aside. But today, I decided that rather than hold onto the game on the off chance that we might use it, it would be better to give it to a place where the maximum number of people can get use out of it. I contacted our fearless school parent-leaders, Windy and Aimee, who volunteer more than full-time running the parent committee that raises over $400,000 a year for school essentials, like the library aid and P.E. instructors. They are both so wonderfully creative that I am sure that they will find an imaginative use for it in a fundraiser event or make sure the right teachers get to use it for a fun math lesson. I took it over to Aimee, who kindly agreed to find a good home for it in the school and asked me to thank Frank for the gift. Having accepted the gift from Frank and then passed it along via Aimee to give to the school, it seems to me that, just as it can take people many moves to find the right place to settle down, sometimes objects too need to travel a little before they find their right home.