Every Thursday lunchtime, I volunteer at my son Theo’s school helping the kids sort their lunch trash. In Theo’s first year at the school, I was part of a local environmental group. For Earth Day in 2010, we launched a volunteer program at the school to help reduce the waste created at lunch times from a whopping 168lbs a day by sorting lunch waste into recyclables, landfill trash and liquids. The school’s mascot is the dragon, so we called our new recycling group the Green Dragons and we have a sorting station near the lunch tables where kids can volunteer as Green Dragons and help other kids to recycle. Early on, we estimated that we were able to cut the volume of waste down to about 60lbs, but more importantly, with this system in place at the school, the kids are now used to the idea that it’s good to recycle. Not all of them bother, but that’s fairly reflective of society as a whole. 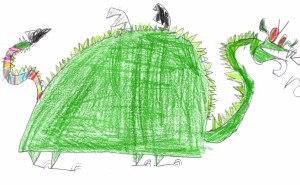 As the parent who runs the Green Dragons, I am responsible for recruiting other parents to volunteer at the trash sorting station – not the most glamorous job at the school, as it often requires digging plastic bottles and other recyclables out of the trash cans and rinsing out hummus and yoghurt containers. Hey, as Kermit the Frog would say, it it’s not always easy being green. However, I do actually enjoy getting grubby with the kids, seeing know how kids other than my own behave and interact. And, when I’m there, I also get to work with Edwin. Edwin is the school’s plant manager. He worked at the school years ago, but had lost his position because of a short-sighted cost-saving move on the part of the school district. I remember hearing of the legendary Edwin when we first started at the school, but didn’t meet him until a couple of years ago when he was given back his position, much to the delight of the school staff and students.

Edwin is no ordinary plant manager. As well as looking after the facility, he also looks after the kids. He knows all of their names and engages with each one of them as they come running up to the table to leave an apple they don’t want on the share table, or to throw some plastic wrappers into the trash. Even if the kids have been sent to help with trash as a sort of punishment for some schoolyard misdeed, Edwin makes Green Dragon “community service” fun. He chats with them, teasing the cheeky ones and keeping the rambunctious ones in line. I even enjoy being a Green Dragon more because of his cheerful personality and the easy manner he has with kids. The other week I found out that Edwin loves to draw. I had a notebook with the title “Gratitude” on the cover and some related quotations peppered throughout it, perhaps something he can use for sketching figures when he has a free moment. I didn’t realize till later that the notebook was also green, the color that caused us to meet. I certainly feel grateful towards Edwin for making it easier and more enjoyable trying to be green.