Today was Easter and it was ok. It could have gone really badly, but it really ended up being an exercise in quick recoveries. Friends who had invited us for brunch and an egg hunt were concerned that we might still be contagious with whooping cough, so they asked us very nicely and apologetically if we would be ok not coming. Though it hurt to be uninvited, we understood their concerns, and this morning, we eagerly set about hiding eggs in the garden for Theo to have his own egg hunt. Theo tackled his egg-hunting mission with enthusiasm, while I followed behind him videoing his moves and commentary. I thought I’d taken some good footage, but afterwards we discovered that because of a misplaced finger, I hadn’t filmed the hunt. For a few minutes, Theo was upset, but David managed to lure him into the garden again to play catch. For lunch, David found a Groupon coupon he’d bought for a Shabu-Shabu (Japanese hot pot) restaurant that was due to expire today, so we headed over there for a very non-traditional Easter lunch. When we showed the waiter the coupon, he told us it only applied if we bought four Shabu-Shabu meals. There were only three of us and we couldn’t possibly eat that much food, and didn’t want to spend that much money. Seeing our deflated expressions, the waiter said he’d check with the manager and then came back saying we could apply the coupon. Thanks to his thoughtful efforts, we had a great lunch, which could possibly become our new Easter thing. 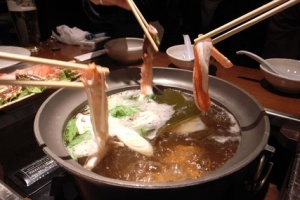 When it came to my Giveaway, though, I was discouraged. It’s Easter Sunday, we had no plans to see anyone, the Post Office and many other businesses are closed. I was low in energy and ideas and starting to feel worried that I couldn’t give anything away today. However, I realized that one of the good things about being stuck at home sick with my son off school this last week or so was that I managed to sort through a lot of his books, toys and other stuff. Instead of struggling to find some poor unsuspecting child to give books or toys to or beating myself up about being more organized about the Giveaway, I grabbed 10 kids’ books and headed over our Little Free Library by Theo’s school, thinking at least I could fill up the library. For the first time in a while, the library was almost completely full. As I squeezed our books into the remaining space, I wondered if there was perhaps some other parent out there feeling under-the-weather, at their wits’ end and desperate to shift stuff during Spring Break.