Today started fairly normally in this part of the world. I got up, had breakfast and met my friend Susy so we could walk around the lake together (past all the construction work and LADOT cones). While we were walking and talking and I was occasionally coughing, my sister Roshan called with the shocking news that there had been a major earthquake in Nepal a few hours ago, and asking if I’d heard anything from our brother Alan. Alan is in Nepal staying on a farm just outside the city of Pokhara. The epicenter of the 7.9 earthquake was between Kathmandu and Pokhara, so we know it must have been strong where Alan is. We haven’t heard from Alan, and we can only hope that it’s because communication is down where he is, and not because he has been hurt or worse. 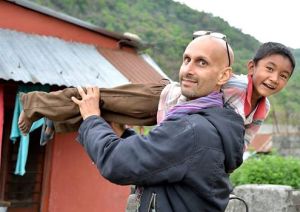 Only two days ago, he and I were talking on his cell phone and had wonderfully clear reception, and last night he sent me a message on Facebook saying that he has booked his flight to Los Angeles in June. Modern technology has made international communication remarkably easy – except during such emergencies. Then we are cut off and have no way of reaching our loved ones who are in trouble. It is excruciating not knowing where he was when the earthquake hit – maybe having lunch in a café in Pokhara or sitting with his host family on the farm? – but also knowing how absolutely terrified he must have been (and may still be) and how alone he must be feeling without family and close friends. Nepal is one of the poorest countries in the world, so we know that not only will the devastation will be bad and that it will take a while for communication to be restored. There is nothing for my sister Roshan and me to do but wait until he finds a way to send us a message and tell us he’s ok. More than anything, that is what I am waiting for today and will probably be waiting for tomorrow and the next day.

In the meantime, there is only one thing I can give today that has any meaning. Not some object or item of that is cluttering my shelves or drawers or sitting in a pile on a shelf waiting for a new home. Not any object at all. The only thing I can give that could possibly help anyone in Nepal right now is money. Alan told me recently that what has made his time in Nepal so special has been getting to know and photograph the children he has met there. So, I chose a charity that I have trusted since my own childhood – Save the Children – and made a donation to them so that they can get aid to the children of Nepal as soon as possible (http://www.savethechildren.org/site/apps/nlnet/content2.aspx?c=8rKLIXMGIpI4E&b=9241341&ct=14615143&notoc=1). Hopefully we will hear soon from Alan that he is safe and well and has started taking his wonderful pictures of Nepal’s beautiful children again.