Today our son Theo went off to writing camp for the day, a camp that he would have made an almighty fuss about less than a year ago, but one that he is now happy to attend. Apparently, his favorite subject at school is now writing. The camp is run by Sascha, a friend and fellow mother at Theo’s school, whose daughter is in Theo’s grade and son is a few years older. Sascha has been sharing her passion for writing and storytelling with many of the kids in the school for several years now, either in her creative writing classes and clubs after school or imaginative camps during summer and winter breaks. A couple of years ago, Theo had attended one of her winter break camps. At that time, he still didn’t like writing and was surrounded by super-keen girls of his age who seemed to be writing their first novels or, more likely in L.A., screenplays. Theo was a bit discouraged, as were we, but Sascha reminded us that boys’ fine motor skills take longer to develop than girls’ do and that for some boys it can actually physically hurt to write for a long time. So Theo wasn’t being dramatic about his sore, tired hand. He just wasn’t really ready to write back then. Now things are different, and off he went to camp this morning. I relaxed and got to work on my own writing projects knowing that he was in very capable hands.

I first met Sascha at some school event or gathering probably sometime early in 2011. It was shortly before her documentary film, California State of Mind: The Legacy of Pat Brown was released – a work that was deeply important to her professionally and personally. She invited my husband David and me to attend the premiere at the Newport Beach Film Festival, and that evening we were treated to a beautifully balanced and meticulously researched presentation of the life and work of Governor Pat Brown – a governor who made a remarkable contribution to California’s social, academic and geographic infrastructure. He was also her grandfather. Although she doesn’t like to shout about being a member of the Brown clan, it is clear that she shares the family’s intelligence, diligence, and boundless creativity. This is something I have witnessed not only in her film, but also in our conversations about education, politics and art over the last few years. Sascha also possesses a great compassion and generosity, which I see in her desire to share her love for storytelling with others and her encouragement of those children, like Theo, who haven’t yet figured out how to tell their own stories. 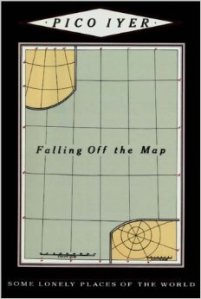 Today, when I picked up Theo from camp, I gave Sascha a book Falling off the Map by one of my favorite writers Pico Iyer. Because Pico has a life that straddles many cultures – as I have – but has also spent a considerable amount of time in California, where his mother lives, a book of his seemed a logical choice for my gift to Sascha. More importantly though, his books are exquisitely written accounts his travels and experiences with people from far-flung places. If she is able to snatch a few moments for this book over the summer, she will find herself caught up in the magical words of a fellow intelligent, imaginative and compassionate teller of tales.