Every few months I receive a phone call from Mr. Yajima telling me he’s in Los Angeles and would like to discuss one of the projects he’s involved in with me – usually something to do with Asian art. I first met Mr. Yajima about 15 years ago, when I was curating an exhibition for Pacific Asia Museum on Buddhist art and iconography and writing a related book on the subject called Reading Buddhist Art. At that time, he was involved with a Chinese embroidery company that specialized in Buddhist embroideries, many of them made for Japanese Buddhist temples. He kindly arranged to lend me a couple of these impressive works for my exhibition and some images for my book. When the exhibition opened and my book came out. Mr. Yajima came to my book signing at the museum and made my day by buying ten copies of my book!

I’m not sure exactly what Mr. Yajima does for a living, but his main focus seems to be to help artists in China and Japan to sell their work overseas. He lives in Japan but spends much of his time in China working with embroiderers and other textile artists and more recently with ceramic artists at China’s ceramics city Jingdezhen, where fine porcelains have been produced for 800 years. Over the years, when he has visited Los Angeles, we have got together for chats about possibilities for selling and exhibiting such works here. I have not been much help to him really, but he has always been very appreciative and has always brought me a beautiful gift from Japan and often something cute for our son Theo. Last time he gave me a camera to give him!

Last week, Mr. Yajima called telling me some colleagues in China are interested in translating my Reading Buddhist Art book into Chinese and would like me to contact the publisher about obtaining the copyright to do so. This came as a surprise to me because it would probably be easier to ask a Chinese Buddhist art expert to create a similar – and better – book, but I was honored and agreed to contact my publisher. I arranged to meet with Mr. Yajima today for coffee to discuss this more, and, because he always gives me something, I wanted to give him a present this time. I chose a Japanese book from my collection called Bunkazai no Mikata (How to Look at Cultural Treasures), which largely features Buddhist temples and sculptures, a book that closely relates to the one we were discussing. He liked the book and said he thought it would be useful as he spends a lot of time at Buddhist temples. But, of course, his generosity trumped mine and he produced a beautiful square ceramic dish with exquisite gold detailing from Kyoto, a piece that would look spectacular on anyone’s table. He also gave me some toys for Theo. In my many years of experience of Japan and the Japanese, I have learned that, try as I occasionally may, I will never be able to out-gift a Japanese person! 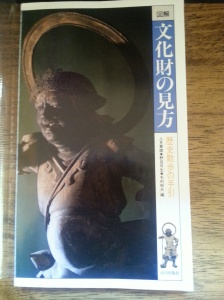