In 2008, I had submitted a proposal to a UK publisher who was looking for an author for a biography of Confucius (see also February 24). I have a background in East Asian art, I had studied some East Asian philosophy, and had written a few books by this time, so somehow I had managed to persuade the publisher I could do it. However, once they accepted my proposal, I then had to persuade myself. I started reading as much as I could about the Chinese sage and before I even put a word on paper, I made an appointment with a local expert.

David is a Professor of Asian languages and cultures at UCLA and has a specialty in ancient Chinese history and historiography. He kindly took time out of his very busy teaching, research and administrative schedule to meet with me, but a few minutes into our conversation, he told me, “It’s impossible to write a biography of Confucius.” I tried not to despair as I had signed a contract with the publisher so now I was legally obliged to try to do this impossible thing. But he didn’t mean I should give up, just that there was little point in trying to write an account based on fact, when next to nothing is actually known about this man who lived 2,500 years ago. He encouraged me to work with the legends, which is what I did while also attempting to point out why some parts of the traditional accounts could not be true. The result was decent, but the process was one of my most educational and challenging journeys to date.

Today, a good seven years later, I met David under very different circumstances. He is now dating a good friend of mine, Marina (see March 2), and I was meeting them together for the first time. I had only met him previously in academic settings, mostly at UCLA, so it was refreshing to get to know him better socially as a person and as a partner to a dear friend. Witty, warm and open, David was as delightful as a social companion as he had been helpful as an academic colleague, and hopefully we have begun a new friendship thanks to lovely Marina. After we had finished our wine, I gave him a small Chinese copy of The Analects (Chinese: Lunyu) that I had bought in Qufu, Confucius’ birthplace. The Analects is a collection of sayings attributed to Confucius and observations by his students of his actions, behavior and dialogues with his students. No writings by Confucius have survived, but after his death his followers complied this small volume of 20 chapters. Assembled in a rather haphazard way and more of an interpretation of his teachings than his actual words, it is the closest book that exists to what his teachings might have been. 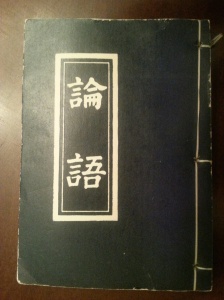 David seemed genuinely pleased with the book, saying he had lost the small copy he had bought in Qufu. He also said he’d actually use it. This made me very happy indeed. When I explained to David and Marina that the pleasure I receive from giving everyday, especially when a gift is so appreciated, is what makes my Giveaway so rewarding, David replied, “It’s what Mencius said. He believed that people were essentially good and that they enjoy doing good and being good to one another. Maybe your next book should be about Mencius!”