We made it back home from the lushness and heat of our weekend in Ojai and settled back into our home. After dinner was done, I headed out into the evening wondering what and how to give now that the light was fading. I chose a colorful woven bracelet from Peru, which we bought on a magical vacation nearly 8 years ago, when our son Theo was four. He actually turned 4 at Machu Picchu, competing with the mountain wind to blow out the four little candles I planted in a breakfast bun at the café outside the ruins.

As I turned the corner from the street and passed by the glistening lights of the Chandelier Tree, I saw the familiar silhouette of a friend, Miele, out for a twilight walk cuddling her baby in her arms. Miele lives a couple of blocks away from us and had brought her 9-month old son Leo out to see the lights on the Chandelier Tree before putting him to bed. Miele has an otherworldly beauty, a slender barefoot fairy living a healthy, raw-milk, natural life among shoed, latte-drinking city beings. She is one of the greenest people I know, living an almost zero-waste life, composting everything she could possibly compost and taking tremendous care over the food she puts into her own body and those of her three children. 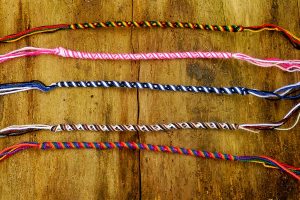 Her youngest Leo gave me a mischievous smile as I greeted his mother. She asked me how my summer was going and I told her we’d just returned from Ojai. “Ah, Ojai…,” she nodded, and we walked together for a few minutes, chatting about how lovely it would be to live there. Every now and then, Leo reached his hand out to point at something or gave me another of his knowing smiles. I reached into my pocket and pulled out the bracelet that I had planned to plant somewhere along my walking route as a guerilla gift. I realized it would be much more meaningful to give it to Miele or to Leo. I explained about my blog to Miele and was pleased when she smiled and nodded her approval of my project. I offered her the bracelet saying I would like her or Leo to have it. She thanked me and handed it to Leo who instantly grabbed it and put it straight into his mouth. What greater praise could come from a 9-month old? “The gift was a hit! ” I thought to myself with a giggle as we parted company in the deepening darkness.