Today I had my son Theo be my Giveaway pinch hitter. Like most kids these days, Theo has way too much stuff – too many toys, too many books, too many clothes even. He also has too much baseball stuff. Because he played baseball for 3 years in a local league, as well as the shoes, bad, helmet, bag and gloves, he also accumulated three uniforms, a couple of which we have already given away. For two years running he was on the Dodgers team, so wore local LA colors. We have already given away one of his shirts but he somehow had three Dodgers caps, so today I suggested he give away one to a friend who will be leaving Los Angeles and returning to Korea tomorrow.

Theo’s friend Oscar is actually his friend Samuel’s 11-year old cousin who has been staying with Samuel for the whole summer. On a few occasions this summer, the three boys have got together for playdates and art classes and because they all have common interests – mostly video games – the three boys got along fairly well. However, the highlight of Theo’s time with Samuel and Oscar was when we went for lunch at a restaurant together after their art class about a month ago. I had arranged to meet two colleagues who are also friends (they are also both mothers of youngish children). We three sat at one table while the three boys ate at their own table behind my seat. I knew the boys were up to something funny behind me because I heard lots of giggling and then Theo saying something about hot sauce. When I turned around, I saw that Theo was filming the three of them with his tablet. They were doing what he called a Hot Sauce Challenge and recording it as a video for Theo to post on his Youtube Channel (https://www.youtube.com/watch?v=1I457SWuIUw). Their antics were hilarious, with Theo trying hot sauce for the first time in his life, while his two Korean buddies – hot sauce pros – were calmly gobbling it down, Oscar drinking it straight from one bottle. I’m glad Theo has this hilarious memory of their time together this summer. Today, Theo gave Oscar one of his Dodgers caps so that Oscar too can have a memento too of his crazy, fun summer in LA. 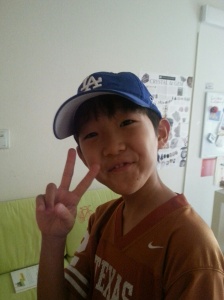