Today is our son Theo’s last day of summer break before he enters 5th grade. It is hard to believe that in a few months he will have completed his 6 years of elementary school and will be preparing to embark on the next stage of his education. It’s a cliché, but the years really do speed by. It certainly doesn’t seem like almost eight years since he started preschool, one day after his second birthday. We have many fond memories of Lyric Preschool, its owner and principal Mr. Curtis, the kind teachers of many ethnic backgrounds, the diverse holidays they celebrated, the varied menu the kids enjoyed, the mouth-watering smells that wafted out of the kitchen (Mr. Curtis loves to cook), and the fabulous performances the kids put on at the end of every year. Though it drove me crazy every day after I brought him home from preschool, now I even fondly remember all the sand I had to pour out of his shoes. The kids always seemed to have such a blast playing in that sandy yard.

Today I visited Lyric Preschool on Hyperion Avenue in Silver Lake, not merely out of a sense of nostalgia, but because I wanted to celebrate the school’s reopening. Just over a year ago, the school had a fire, caused by an electrical problem. Since my family understands the trauma of losing and rebuilding our home after a fire, I wanted to be there to celebrate the school’s rebirth with Mr. Curtis, who along with a team of wonderful caring teachers, looked after our son for three formative years. I also wanted to give Mr. Curtis a bag of art supplies – crayons, markers, papers and the like – that we no longer need. 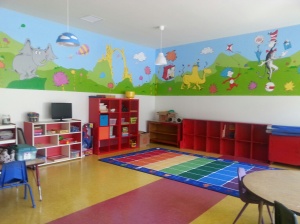 Mr. Curtis was beaming proudly as he showed me around the newly renovated and painted rooms and the spectacular artwork – a huge Dr. Seuss mural painted by one of the school’s star teachers, Ms. KC, who returned to reprise her teaching role there today. I teared up a little as I reminisced with Miss KC about Theo’s time at Lyric and watched as the new batch of little cuties made their way around the colorful rooms. Mr. Curtis’ daughter Michele, who had often helped run the school when he was out of town, was there with her own elder son, who is now a student at his grandfather’s school. When I first heard about the fire, I had wondered if Mr. Curtis would close down the preschool and retire after over 30 years of running the place, but when I saw him gazing warmly and smiling at all the new children who were enjoying their first day at his school, I fully understood why he chose to rebuild.