Although I fell in love with the visual arts of Japan and have devoted my career to learning, teaching and writing about various aspects of them, I have not felt as passionately about Japanese music. Although I find the woody tones of the shakuhachi bamboo flute hauntingly beautiful and I love the frenetic energy of the rapidly strummed Tsugaru shamisen, I haven’t been as drawn to what my mother used to refer to as the “plinky plonky music” of East Asia. I don’t have a well-trained musical ear (nor did my mum probably), so I honestly don’t think I have the musical sophistication to appreciate the tone and rhythm of a lot of Japanese music. So when it comes to listening to music to relax at home, I am more likely to play baroque guitar, Spanish classical guitar, classic jazz, or even Indian flute and sitar music. As I was clearing out my CD collection recently, I discovered a few CDs of Japanese koto and shamisen music. They are beautiful CDs, but I have never chosen to put them on at home while I work or relax, so I decided to donate them to the Storrier Stearns Japanese Garden, where I have been helping with their programs for the last few months.

We had scheduled a performance of Gagaku in the garden this evening. A classical Japanese court music that has a history of about 1,500 years, gagaku used to be played exclusively for the Imperial court and in religious rituals in shrines and temples. Although it can still be heard occasionally at Shinto shrines and Buddhist temples today, it is one of the country’s more rare and esoteric musical traditions. Not being a great lover of Japanese music, I wasn’t sure if I was actually going to enjoy the performance. But it was lovely. As the sun went down behind the trees and the local flocks of parrots squawked overhead as they headed to their roosts for the evening, I sat mesmerized with a crowd of over 60 people surrounded by trees and still water as the musicians performed this ancient tradition. 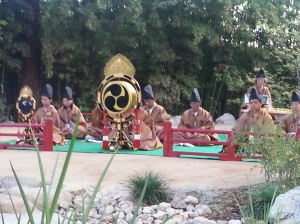 The high-pitched hum of the flutes and the gentle rhythm of the drums wafted through the cooling summer air, and I found myself unraveling a little, calming down inside and losing myself in the almost ghostly melodies of the ancient aristocratic music. This kind of music is still not the type of music I would play at home – it wouldn’t translate well to an indoor home setting – but I was unexpectedly enchanted by the evening performance in the garden. Although I still happily donated my CDs to the garden for them to use at parties and events, I came home feeling that my appreciation of Japan’s musical traditions had been elevated a notch or two.