Our son Theo played in his first ever game of soccer this afternoon, a very sweaty experience in a heat wave on Astroturf. Mercifully, the day was strangely cloudy and humid, bringing the temperature down to the upper 80s, so the coaches, parents and kids were somewhat relieved. For much of the game, Theo and the other boys who were playing for the first time seemed unsure if where to put themselves, and just ran around generally close to where the ball was doing their best to stop the other team, who seemed much more experienced, from making every goal they attempted. The final score was brutal, but nobody pretended our team hadn’t lost, as they often do in kids’ sports. Usually, there’s no official scorekeeping and all the players get trophies at the end. The boys took their loss well and realized they have a lot of work to do for their next games.

We brought Theo’s teammate, Esai, whose dad is their coach, home after the game for a play date, and the boys spent the rest of the afternoon together playing, sometimes on screens, but also with paper. When told they had to come up with some other way to play, they started making paper airplanes using one of Theo’s books. I asked Esai if he’d like to make an origami ninja star and his eyes lit up. He’d made them before using his Joy of Origami book, he explained to me enthusiastically. I pulled out some origami paper and instructions and left them out on the table for the boys and Esai immediately started folding a ninja star and a cute little plane from a packet of Japanese airplane models I’d bought in Japan while Theo folded planes. I decided to make a little origami kit containing paper, some instructions and a little booklet for him so he could do more at home. When his dad came to pick him up, I explained the gift, he told me that Esai loves origami and they’d even watched the documentary film Between the Folds together – the very film that had inspired me to curate my last four exhibitions of origami art! 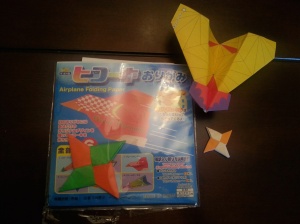 Recently I have worried about Theo’s obsession with video games. But, this afternoon seeing him also enjoying playing soccer and having a blast folding paper airplanes and with a buddy and running around the house flying them together reassured me that he hasn’t been completely sucked into the digital world! It was hopefully clear to both boys too that they may have lost their game of soccer today, but when you have good friends, imagination and creativity, you are always a winner.