Today we gave a book in the Bad Kitty series to my friend Lena’s son Malcolm (see also Feb 3 and August 4). Malcolm is a feisty little 7-year old who loves sports and all things athletic. Unlike our son Theo, he also loves math, but like our Theo at the same age, he hasn’t developed a love of reading yet. Like me, Lena has been searching for books that will capture the imagination and attention of her young lad, and she had mentioned to me that he’d liked the Bad Kitty series. So had we, and in fact it was one of the first series of books that Theo had begun read by himself when he was in 3rd grade. In this series, the author, Nick Bruel, who writes and illustrates the books, has created a truly whimsical character in this series – a cat who wreak havoc around her owner’s house when she is upset. And she’s upset quite often, like when she’s forced to have a bath, she’s not fed, or when the puppy is around. The appearance of the kitty, who is mostly black with a tuft of white fur on her chest, is apparently modeled after a cat named Zou-zou that the Bruel had as a child. One of the reasons Theo took to the book so quickly is that one of our cats, Mystic, has the same coloring, and also goes a bit berserk from time to time. 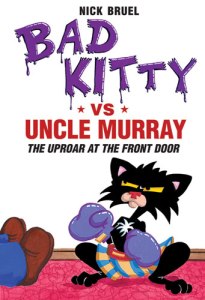 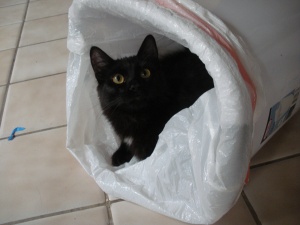 Mystic in the trash can

This evening, Lena and Malcolm stopped by after Malcolm’s soccer practice. Malcolm looked ready to play a game in his cleats, long socks, shirt and shorts. Quickly the boys got chatting and in no time they were outside bouncing around on Theo’s pogo stick. Lena joined my husband David and me in the living room and we talked, mostly about our boys, sports and schoolwork. I happily showed her the book that Theo is now reading – one with over 300 pages and hardly any pictures – explaining that although he had not been into reading, he had just chosen to read this book and was actually enjoying it. In fact, he had researched the series and he had asked me to buy it when we were at Barnes and Noble this afternoon, a shop he’d gone into excitedly.

Other people had reassured me that Theo would enjoy reading “in his own time.” Though I doubt Lena is as anxiety-ridden as I am about her son’s schoolwork, I wanted to give her a similar reassurance. And also share with her a hilarious book about a crazy cat that I know will make both her and her adorable boy laugh hard.