For My Daily Giveaway, I don’t usually give away money. I’ve only done so once this year after the earthquake hit Nepal where my brother was staying. Today, I was inspired to make a financial gift after spending much of the day working on an essay for my book about contemporary origami artists. The artist I was writing about is Bernie Peyton, one of my favorite artists as a person and as an artistic innovator. His origami depictions of animals and plants push origami into the realm of mixed media sculptures. One of his works, depicting a frog on a leaf is one of my favorite works in the exhibition Folding Paper I curated a few years back.

One of the reasons I find Bernie and his origami so fascinating is that he approaches his creations as both an artist and a scientist. In his twenties he was actually working as an artist, but when his college roommate took him off on a 900-mile canoeing trip through the wilderness, he was so profoundly moved by watching the white wolves following them along the river, that he decided he wanted to save nature and retrained as a wildlife biologist! For 25 years he worked with wild animals, in particular the spectacled bear in Peru, and then just over a decade ago, he left that career to devote himself to art again, and specifically origami. The frogs, lizards, birds and other creatures that he has been folding out of paper are not only highly expressive but they are often shown behaving as they would in the wild, something only attainable by someone who has truly watched and studied them. 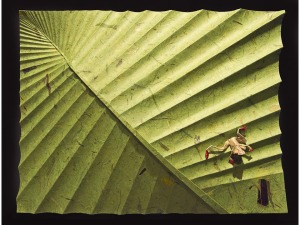 Today after I had finished writing the draft of my essay about Bernie’s work, I looked through the mail. Among the junk mail and bills was a solicitation letter from the Sierra Club asking us to renew our membership. The envelope was particularly thick, so I opened it and found a set of notecards, included as an incentive. This is nothing unusual, but the notecards all featured photographs of gray wolves and are part of the Sierra Club’s campaign to protect the gray wolves of the Northern Rockies. I thought of how the white wolves Bernie had seen in the wild had inspired him and decided that like him, I should do something to help. I filled out their form, sent a small contribution to renew our membership (in our son Theo’s name) and then used one of the cards to send a note to Bernie to thank him for the inspiration. Just so I’d feel ok with this as my giveaway for the day, I slipped a homemade bookmark into his note card, suggesting cheekily that he can use it in my book when it comes out!