Today I accomplished nothing. I didn’t go on my morning walk. I didn’t work on my book. I didn’t send out any important emails. I didn’t even cook a meal. I boiled spaghetti for dinner and added some sauce from a jar, but that really doesn’t count. I’m not sure what exactly happened, but when I woke up this morning I was tired and after a quick breakfast our son Theo invited me to watch the second episode of Glee with him and that was the beginning of the end. We had watched the first episode last night because Theo is fascinated by Chris Colfer, an actor in the series but more importantly the author of the series of books, Land of Stories, which he is gobbling up at the moment. The first episode was a lot of fun – a rich cast of characters, good dialog and some great musical numbers. But I am not one to get hooked on a series, so I kind of thought last night would be it for me.

After we watched episode 2 this morning, Theo suggested just one more, and from my cozy position under a blanket on the couch, I was easily convinced and agreed to just one more, before we got up and headed out to meet friends for brunch. After brunch Theo had a soccer game, in which he was a superstar defensive player, making some steals and blocks that had us all cheering. Unfortunately, towards the end of the game, he took a ball hard in the boy bits and was left in pretty rough shape. He didn’t feel like heading over to the local middle school to see friends performing in a school musical, as we had intended, so we headed home. My husband David had made plans to go out for dinner and a movie with friends, so Theo and I found ourselves back on the couch. “Can we watch another episode of Glee?” He asked. I don’t know what happened to me today, but I didn’t feel like resisting, partly because I had enjoyed the first two episodes and partly because my brain just didn’t feel capable of anything else. That episode turned into two more – a total of 5 episodes today! Theo was thrilled, of course. I was horrified at myself – that’s about 4 hours of tv. I am not a tv person at all, and spend an awful lot of my parenting energy trying to tear Theo away from the tv and other screens. But today, let’s be honest, I’d become a total couch potato. I was a total tuber, incapable of resisting the temptation of the shiny screen.

I can’t remember the last time I watched that much tv in a day – years ago, I’m sure. When David finally came home, I asked him to read to Theo while I did my Giveaway. Not surprisingly, because it was past 9pm and I was clearly suffering from some sort of metal meltdown, I could only think of one place to go – the Little Free Library. But I did come up with a Giveaway that seemed a propos for today. It was a recipe book: 50 Best Mashed Potatoes. 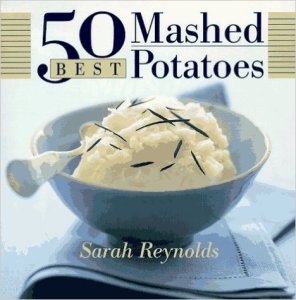