There’s a hotel in Downtown Los Angeles called the Hotel Figueroa. It was built in 1925 in a Moroccan style. It’s being closed for renovation tomorrow and will never be the same, so they have had special rates for their rooms for the last few nights in this incarnation.

In a fit of uncharacteristic spontaneity, I suggested to my husband David that we book a room and head Downtown for the night. David loved the idea, but our son Theo isn’t convinced. Apparently spontaneity isn’t his thing. We have now learned that lesson. Nonetheless, we are off Downtown for the night and I am not bringing my laptop, so I am going to uncharacteristically put the blog before the gift. I will give something away spontaneously this evening and let you know what it was tomorrow. I don’t even know what it will be yet. So I ask you for your trust today in the hope that spontaneity will win the day today. As Jane Austen wrote in Emma, “Why not seize the pleasure at once? — How often is happiness destroyed by preparation, foolish preparation!”

Part 2: Sponteneity won the day indeed! We had a very fun mini vacation. We packed overnight bags quickly and I grabbed a couple of tourist books about LA and we drove about 5 miles to Downtown LA. We stopped at Umami Burger for dinner, then visited the very funky Last Bookstore – one of LA’s great treasures – and then headed for the Hotel Figueroa. We found a parking space right out front, saving us $30, and then explored the hotel for a bit and settled in for the night. After a complimentary breakfast and a gift from the hotel of one of their original tiles, we headed home, happy with our mini vacation but sad that the hotel will never be the same. I think most of the guests who stayed there last night are probably feeling the same. I left the two books – An Irreverent Guide to Los Angeles and another – out in the lobby last night and they were gone this morning, so one or two of them may have another idea for somewhere fun to visit while they’re in this city of surprises. 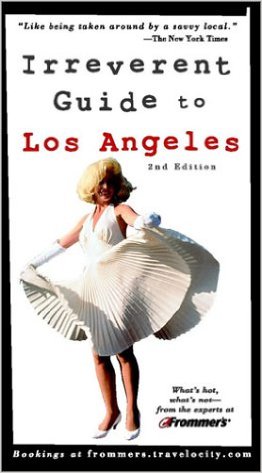