When I first joined Pacific Asia Museum as a curator in January 1998, I was very green and more than a little intimidated. It was my first job as a curator, and though I had spent the last few years studying Asian art, I wasn’t sure how well I would be able to translate my newly acquired skills into curating exhibitions and giving lectures about art.

My first assignment in the new job was to research and write labels for an exhibition about the Philippines. I’d mostly studied Japanese art, so this was not my area of expertise at all! I had to learn quickly though because the exhibition was due to open a couple of months after I arrived. I worked very intensely reading about the Spanish galleon trade through the Philippines, studied a Filipino artist called Fernando Amorsolo and learned as much as I could about Filipino poetry (it was a strange exhibition that was conceived before I arrived). A week before the exhibition opened, I was relieved to have finished writing all text panels and labels. However, I was concerned because my boss wanted me to give a lecture to the museum’s docents with him and he still hadn’t told me what he wanted me to say or do for the talk. I went ahead and prepared some slides for the presentation, and the day before the lecture, when he still hadn’t told me what he wanted me to do, I suggested that it might be better for him to give the lecture solo, as I felt very unprepared. At that point he turned his back on me and walked out of the room. He ignored me for the rest of the day. The next morning, just 30 minutes before the lecture, I received a phone call from the front desk saying that my boss was sick and wouldn’t be coming in today. I was on my own with the lecture.

I have recurring dreams about having to take a test or give a lecture with no preparation. At this moment, such a dream was my reality. My stomach was turning with a mixture of anger at my boss and fear of messing up the lecture. However, I had prepared the slides so I picked them up and made my way over to the auditorium where the docents were waiting. As I entered the room, I saw the docents looking at me with friendly anticipation, so I pulled myself together, explained to them that I was pinch-hitting for this lecture and apologized for not being an expert. Then I clicked on the first slide and went on to give the best talk I could under the circumstances, motivated mainly by a desire to share with them everything I’d learned while preparing for the exhibition. After the lecture was over, they practically gave me a standing ovation. This was the moment when I bonded with the docents of Pacific Asia Museum (PAM), a group of well-educated, creative and generous women and men who are committed as volunteers to learning as much as possible about the arts and cultures of Asia and sharing their knowledge with the public – my own goal as an Asian art curator. For the nine years I worked as a curator at the museum, though my relationship with my boss was a rocky ride, one of the great joys of my job was working with the docents, teaching them what I knew and learning from them in return. I watched with admiration as they toured school children through the galleries and picked up tips from them on how to connect young minds to the art. I listened to their comments and suggestions about touring and learned to design all my exhibitions with a narrative flow to help make them easier to tour. I even wrote two of my books – Reading Buddhist Art and The Arts of Asia – with the PAM docents in mind.

In 2006, I left Pacific Asia Museum (now USC Pacific Asia Museum). For a while I continued to guest curate exhibitions there, and I have continued giving lectures to the docents, allowing me to come back and see my dear friends and fellow Asian art educators. I also make sure to attend their Holiday party every December, which is a wonderful chance to see them in action in many different ways, not just as educators but as writers, actors, dancers, designers, decorators, event planners, and most deliciously, as chefs! Today, I joined them to celebrate the giving season and contributed about 10 books about Asian art and culture to their holiday sale, in the hope of helping to raise some money for their annual activities. One was a 1960, first-edition copy of James A. Michener’s Japanese Prints. It didn’t sell but it will apparently be added to their library as a tool to help docents in their research. As always, I left the party feeling like I had been back with my tribe, with a group of people who are passionate about art and education and who warmly support each other, especially when learning and teaching can seem more than a little intimidating. 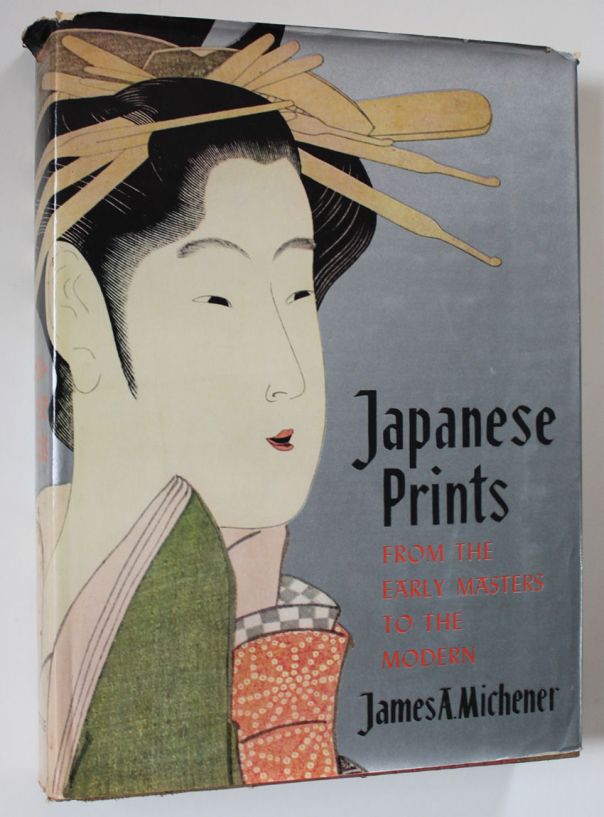