When we were growing up, my younger sister, brother and I felt different from the other children in Longniddry, a village of about 3,000 people in southeastern Scotland. Dad was Scottish, so that was the same as the other kids, but Mum was Persian, which meant we were “colored,” the darkest kids in the school. Because we weren’t white, we were often teased, called all sorts of names ranging from “Coca Cola Face” to “Paki” to the N-word. I was infuriated by these taunts and complained bitterly to my parents. I remember my father telling me not to be bothered by those children, because we were citizens of the world, and this was a good thing. I wasn’t always convinced. In the future, he reassured us, many more children would look like us and live like us in different countries. On several occasions, to illustrate his point that there were more and more global families like ours in the world, he told us about a lovely couple who he and Mum had befriended when Mum was pregnant with me. The husband, Barry, was American and the wife, Rie, was Japanese. They had met in India, where my parents were living, and then traveled in Kashmir together, where they shared a houseboat and Rie performed the tea ceremony for them all. Growing up, the image of my parents drinking tea on this exotic houseboat remained in my mind as a model of a truly international society – the one I wanted to inhabit.

Years later, decades after Mum and Dad had lost contact with Barry and Rie, I began my job at Pacific Asia Museum in Pasadena. I had studied Japanese, lived in Japan and chosen to specialize in Japanese art history. Now I was working as a curator, organizing exhibitions of Asian art and getting to know all sorts of interesting patrons and supporters of the arts. At one museum dinner for high-level members a couple of years into my work there, I was seated across from Frank, an interesting man who had owned the Oriental Book Store in Pasadena for many years. He was telling me about how he and his wife Toshie had met in Japan when he was visiting Kyoto. She had been a tour guide and it had been raining. They had shared an umbrella and this was the beginning of their romance. They were married soon afterwards and then decided to take some time to travel. One of the places they visited was India, and when he described their travels throughout the country, I had a sudden realization.

“Oh my God!” I exclaimed. “Was this in the mid 1960s?” Frank said it was. “Did you by any chance know Tom McArthur, my dad?” Frank’s eyes got big. “Yes, we knew him and his wife Feri. We met them at Amritsar and then traveled to Kashmir with them. She was pregnant at the time.” At this point, my mouth was hanging open and tears were starting to well up in my eyes. I got up from my seat and walked round to where Toshie was sitting. I was already fond of her from our various conversations about Japan and Japanese art. When I told her that she and Frank had known my parents when I was in my mother’s belly, she was as moved as I was, and we both hugged. I was by now visibly crying, and we were attracting the attention of the other members of the dinner party. Soon the story spread around the table, and luckily, the group realized the extraordinary nature of the moment, our en, as Toshie calls it. En (縁) is the Japanese word for a connection, not just an ordinary bond but one that has a hint of karma to it. Since that evening, Toshi (as she is known by friends) and I have been close, almost like family. Shortly after that evening, I asked her about their names – why my parents had called them Barry and Rie, when their names were Frank and Toshie. She explained that Frank’s nickname was Barry, and the Japanese characters for her name could be read Toshie or Rie, so Rie is Frank’s nickname for her. I updated her about my parents; she was very sad to hear that my mother had passed away. Soon, she invited me to their home. She had dug out some 35mm slides that Frank had taken of my parents with them in Kashmir. It was just possible to make out the bump of my mother’s swollen belly. That was me in there. 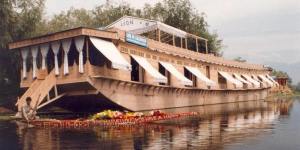 A (not the) houseboat in Kashmir

Today, I had lunch with Toshi and some other friends at the Huntington Library, Art Collections and Botanical Gardens, where she has been tirelessly helping the staff expand and improve their Japanese gardens. When I had a minute alone with Toshi, I told her about my Giveaway and that I wanted to give her something today. It was a silk scarf with a pattern of cherry blossoms on it. Cherry blossoms in Japan are symbols of the transient nature of life and of impermanence, a reminder that we have to appreciate and treasure each moment of our lives. To me, they also represent the captivating culture of Japan, the one (after India, Scotland, Canada and England) that ultimately brought me to California where I re-connected with Toshi and completed a cultural circle of sorts, realizing that my father was indeed right and that I really have become a citizen of the world.