In the mid-19th century in the city of Edo, now called Tokyo, a Japanese artist called Hiroshige was one of the country’s foremost painters and print designers. He had already become famous for depicting the Fifty-Three Stations of the Tokaido (Tokaido Gojusantsugi), a series of landscape prints that tell us as much about the cultural landscape of 19th-century Japan as its geography. In the late 1850s, Hiroshige chose to depict views of his beloved city Edo in a series called One Hundred Famous Views of Edo (Edo Meisho Hyakkei).

END_OF_DOCUMENT_TOKEN_TO_BE_REPLACED

In 2003, about 5 years after I moved to California, I decided to start a group called the Asian Art Curators of Southern California in the hope of forming a network of colleagues who could share information, collaborate on projects and become a friendly community. I invited all the Asian art curators from the museums in the region to gather at Pacific Asia Museum, and cooked red pepper soup and a salad for lunch! Since then, the group has been gathering twice a year at various members’ institutions from San Diego to Santa Barbara, and much information has been exchanged over much fancier lunches. One of the most supportive members of the group is my colleague and friend Ken, who works full-time as a Professor of Asian art history at a local college, has written many volumes on Japanese art and typically has about 3 or 4 exhibitions he has curated up in a museum somewhere in the country at any one time! Over the years, I have enjoyed working with him on various exhibitions, first while I was on staff at Pacific Asia Museum and he was an adjunct curator, then briefly while he was on staff there and I was an adjunct a few years later! His exhibitions, lectures and writings on Japanese prints, gardens and many other areas of Japanese art and culture are so thoroughly researched, lucid and entertaining that on more than one occasion, they have sparked my enthusiasm for aspects of Japanese art of which I’d been unfamiliar or just plain uninterested. 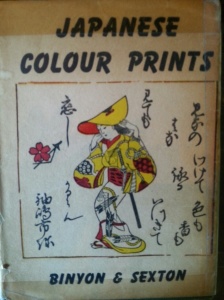 Today, our curators’ group met at the Japanese garden in Pasadena where I have been helping lately. Ken is the expert in Japanese gardens in the United States and has been involved with the garden for several years during its restoration and transition into a non-profit organization. I have him to thank for introducing me to the owners of the garden a few months ago and encouraging me to become involved there as they expand their programs and open the garden more to the public. So, after today’s meeting, I gave him a 1954 edition of a book called Japanese Colour Prints by Laurence Binyon and J.J.O. Sexton, a charming little vintage hardcover that I hoped he didn’t already have on his many shelves. Somehow he didn’t, and he accepted my little token of gratitude for being just the kind of thoughtful colleague I was hoping to cultivate when I started this group a dozen years ago.

The prayer wheel is used by Buddhists in the Himalayan region, where it provides a simple way for devotees to symbolically recite sacred texts, or sutras, or call upon certain deities without actually reading the texts. Inside the cylinder of the wheel is a sacred text or secret formula, or mantra, written or printed on paper or animal skin. The most common mantra is “Om mani padme hum”, or “Praise to the Jewel in the Lotus” addressed to Avalokiteshvara, a bodhisattva, or compassionate being who has vowed to postpone his own enlightenment or nirvana in order to save others first. Suspended from the cylinder is a chain with a weight on its end, which helps the wheel to turn as the user rotates his or her wrist. I have had two prayer wheels for many years, neither of which is particularly valuable, but to me they are fascinating objects, ingenious in design and beautiful in the hope they offer to the illiterate who cannot read the prayers themselves, but can spin them instead. 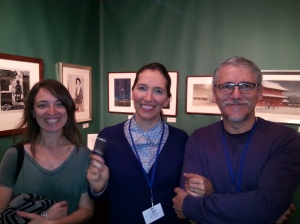 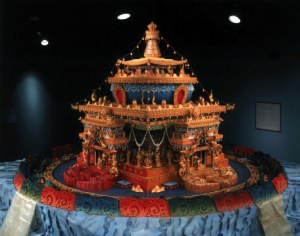 Today, I gave one of them to a friend who I rarely see but whom I associate closely with some of the most meaningful moments I had working as a curator at Pacific Asia Museum. Veronica is a Japanese print dealer with a remarkable knowledge of her material. On several occasions she has patiently explained to me certain artists’ techniques and how to tell the age of a print, and she shared her knowledge of Japanese prints with others at a few programs I organized at the museum. But although we met through Japanese art, it was through her Tibetan Buddhist practice that we really became friends. She has long been passionately active in a local Buddhist community, or sangha, that was once led by Lama Chodak Gyatso, a dynamic and warm teacher in the Nyingma tradition of Tibetan Buddhism. An inspiration to many Buddhist followers, Lama Gyatso launched a project to build a large, three-dimensional mandala for peace. Veronica approached me about displaying the mandala at the museum, and despite some difficulties with scheduling and a particularly fierce political battle in which I was embroiled at the museum, Veronica was a strong and supportive ally, and ultimately we were able to include it at the center of an exhibition and share it with thousands of people. The effect the mandala had on a wide range of museum visitors was wonderful to witness, and it ushered in a more peaceful phase at the museum. It has been nearly 14 years since we worked together on the mandala project and since then, our lives have only intersected occasionally, like today at the LA Art Show, but we still have a bond of mutual respect and affection. I felt it again today. Before I had a chance to give her the prayer wheel, she handed me a beautiful book on Japanese prints – a gift to me. To me, Veronica, with her deep knowledge and her kind, generous nature, embodies the Buddhist principles of wisdom and compassion, the qualities necessary to attain the spiritual enlightenment that so many Buddhists pray for using prayer wheels.