My brother Alan is staying with us this week. As I have mentioned in previous blogs (January 25, April 25 and June 24), he is a man who travels light and has few possessions. He can carry his most important belongings in one large and one small backpack, which is ideal because travels more than most people I know. That’s why I gave him a backpack and a Superman pin earlier in the year, the first gift practical, the second cute, both symbolic. However, today I wanted to give him something that might actually enhance his traveling experience but not take up too much space in that backpack of his.

I had a tiny little iPod Shuffle 3rd generation, an inch-long device that would no doubt be considered vintage today. It was the first iThing I ever bought and I used it every now and again to listen to music when I was on one of my walks. However, after I bought an iPod Nano 6th generation (model that I actually wear as a watch), I let Theo use it. But, after I found him a more recent model used at a yard sale, he lost interest in this one. 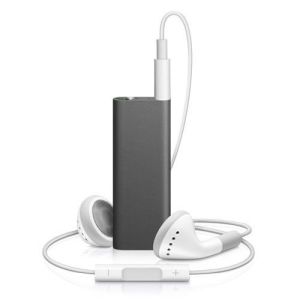 For the past couple of years, this cute little device has been sitting in a drawer neglected. I had been thinking of giving it away bit wondered who would want it now that so many people have their music on their phones these days. Then today I realized it might be just right for Alan, as it will take up practically no room even in one of his pockets, yet once he has it filled up with his favorite tunes, it could transform some of the less exciting parts of his life of travel – the three-hour bus ride with nobody in the next seat, or the plane ride next to a noisy family, or the wait an an airport when a plane is delayed – into pleasurable moments with a personally deejayed soundtrack.